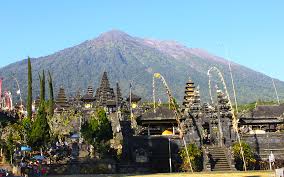 NusaBali.com reports that a 51-year-old American tourist, Kevin Lee Henderson, has died after falling into a ravine on Bali’s Mount Agung. The gorge, located at an elevation of 2,600 meters above sea level, was 25-meters deep.

I Gusti Ngurah Eka, the leader of the Search and Rescue Team that came to Henderson’s assistance, said on Friday, 18 November 2022, the American died while evacuating to safety. The evacuation route down the side of the mountain was reportedly muddy and steep, requiring three teams of litter bearers to take turns slowly carrying the man during a local storm.

Henderson commenced his climb of Mount Agung on Thursday, 17 November 2022, at 11:00 pm, accompanied by I Gede Riasa, a local guide. He planned to arrive at the volcano’s peak at 3,142 meters at 5:00 am on the following morning to enjoy the sunrise. At an elevation of 2,600 meters, Henderson slipped and fell into a 25-meter-deep ravine. The tourist suffered a broken right leg and injuries to his head, leg, back, neck, and knee.

Rescue teams only managed to arrive at the location of the accident at 4:30 pm, when they immediately treated open wounds to stem bleeding before commencing a descent down the mountain. The normal two-hour descent began at 6:30 pm but was complicated by narrow trails, the weight and body size of the victim, bad weather, and darkness. Henderson expired during the arduous trip down the mountain.

Henderson’s wife, Stephanie, awaited her husband’s evacuation at the Pura Penguben Besakih Command Post. She told the press that she had spoken to her husband after the accident. The man was still conscious and reported to his wife the extent of his injuries.

Residents report that following the fatal accident, they are obliged by religious tradition to hold purification ceremonies at the scene of the accident and selected temples on the mountain’s slopes.

Henderson is the fourth fatality among people climbing Mount Agung since 2008. The list of the dead now includes: