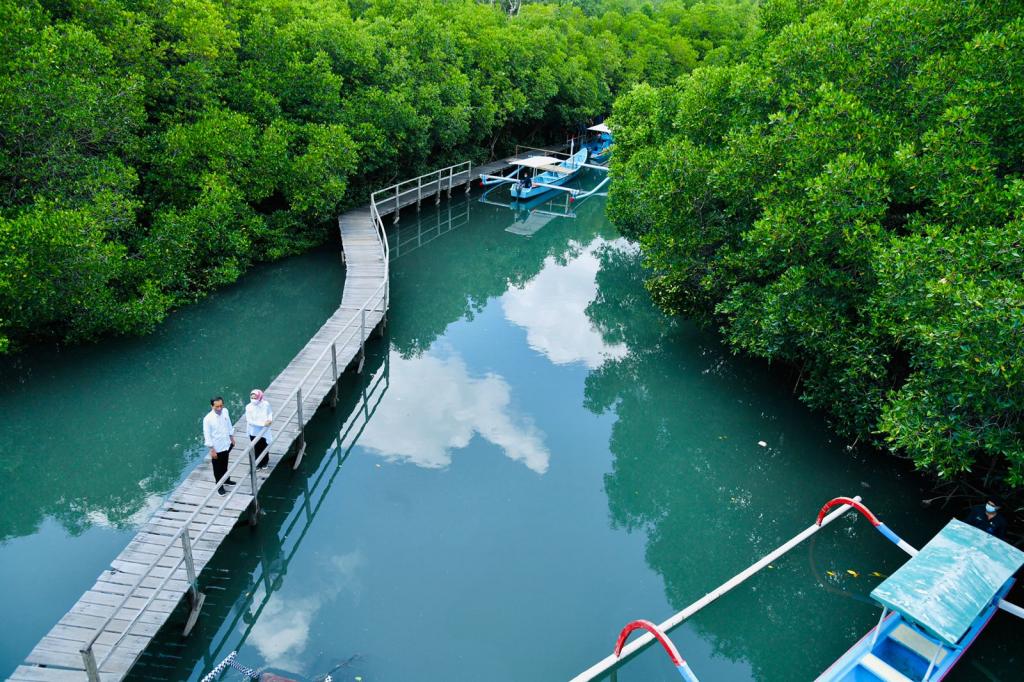 Bali’s large mangrove jungle (Taman Hutan Raya), located in South Bali on the shores of Benoa Bay, is scheduled to become a stop for officials visiting attending the G20 Summit in Bali in November of 2022.

As reported by NusaBali.com, the inspection visit also included Indonesia’s First Lady Iriana Jokowi, Minister of the State Secretariat  Pratikno, the Minister for the Environment and Forestry (LHK) Siti Nurbaya Bakar, the Foreign Affairs Minister Retno Marsudi, and the Head of The Mangrove and Peatland Restoration Agency Hartono Prawiraatmaja.

The delegation of visitors to the mangrove forest, led by President Widodo, toured a 500-meter-long stretch during a briefing conducted by the management of the Mangrove forest at Taman Hutan Raya.

The Mangrove Reserve has been the object of a rehabilitation program starting from 1992. The total area of the preserve covers 268 hectares. Before being declared a protected conservation area, much of the mangrove forest comprised abandoned ponds once used for prawn cultivation. Over the 30 years of its protected status as a conservation area, the Taman Hutan Raya has become home to at least 33 species of mangrove trees and 92 species of birds.

In recent times, the mangrove forest has been the focus of widespread protests organized by devout Balinese Hindus and dedicated conservationists. The protestors oppose a decree issued by former President Susilo Bambang Yudhoyono that removed the protected conservation status on portions of the mangrove reserve. Rushed through in the final days of the Yudhoyono Presidency, the decree paved the way for a controversial plan by the Artha Graha Conglomerate, a business controlled by Tomy Winata, to build a housing and recreation complex on reclaimed land in Benoa bay.

Following intense protest and the project’s failure to obtain an environmental permit, the land reclamation plan has is on hold for the foreseeable future.

President Joko Widodo used the occasion of his visit to share his hope that Bali’s southernmost mangrove forest can become an example to G20 of how forest rehabilitation, conservation education, tourism, and economic development are jointly undertaken in Indonesia. The President said Bali’s success with the mangrove project in Bali should be duplicated in other areas of Indonesia to conserve nature and address the worsening effects of global climate change.

The President also explained to his accompanying delegation and the press in attendance how mangrove forests play a critical role in preventing shoreline erosion and as buffers again tidal and tsunami abrasion.

The people of Bali, Widodo said, were also deriving economic benefits from protected mangrove areas that increase sea life, such as crabs and fish.

The G20 Summit in November 2022 is expected to bring more than 7,000 participants and members of the international press to Bali. Slated to attend are 38 official heads of state delegations and delegates from 38 nations.