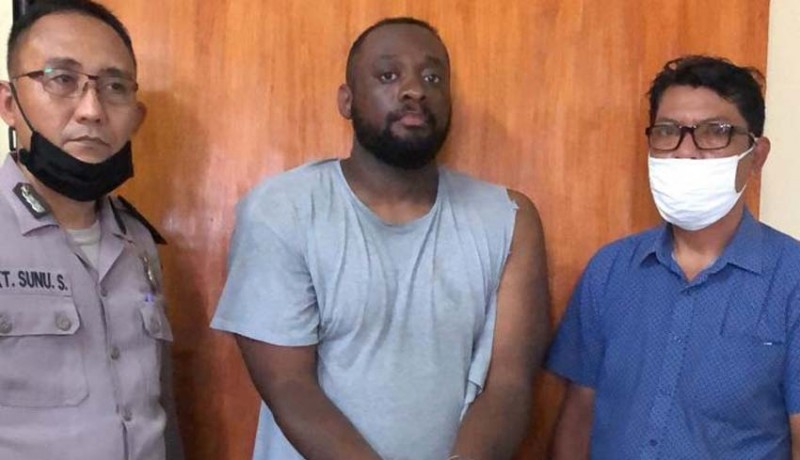 NusaBali reports that a 35-year-old American from Texas, Marcus Dorian Price, was beaten by an angry street crowd as he tried to make his escape after stealing a 1.83-gram golden ring from Toko Emas Surya on Jalan Kendedes, Ruko Number 9, in Kuta on Wednesday, 17 June 2020.

The head of the Criminal Division of the Kuta Police Precinct, Iptu Bagus Baranacita, said that around 11:30 am on Wednesday the American tourist visited the gold shop driving an NMax Motorcycle. Expressing interest in purchasing a gold ring, Price was seen by a store clerk slipping a gold ring into his trouser’s left pocket.

A short time later, Price quickly exited the gold shop and began to board his motorcycle. He was followed in close pursuit by the store clerk, who witnessed the gold ring being pocketed. Police say the clerk screamed “thief, thief” at the fleeing American causing several local residents to give chase as the man traveled in a northerly direction on Jalan Blambangan. When the man arrived at a location in front of the Dharmayana Chinese Temple, the pursuing group managed to stop the man as they administered angry blows on the purported thief.

In the course of the beating, the missing gold ring was found in the man’s left pocket.

Fortunately, police quickly arrived at the scene, managing to take the man into protective custody and protect him from the angry crowd’s escalating wrath.

Officer Iptu Baranacita said the perpetrator was not cooperative with police and refused to admit to the theft. Price insisted to police that only a “simple misunderstanding” had occurred. When police arrived at the scene, they took possession of a branded gold ring weighing 1.83 grams alleged to have been stolen from the gold shop. Police also confiscated the Yamaha NMAX motorcycle driven the American.”