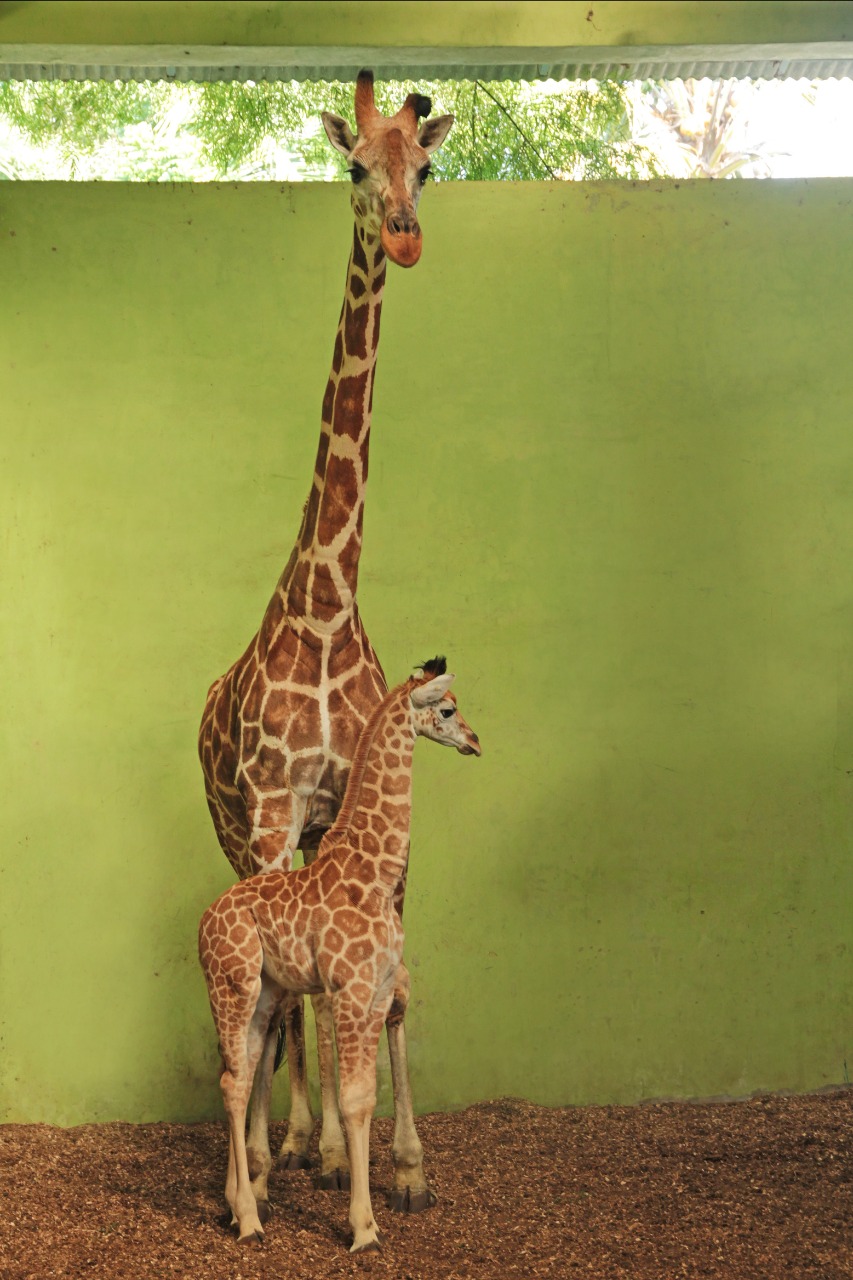 On an Island experiencing a challenging period created by COVID-19, there’s heartening news emanating from the Bali Safari and Marine Park, where on 09 April 2020, a baby giraffe was born to two doting parents – mother, Sophie and father, Matadi.

The name given the Park’s newest resident was chosen by the Minister of the Environment and Forestry, Siti Nurbaya Bakar, who took inspiration from the global pandemic besieging the planet by naming the baby giraffe “Corona.”

Both mother and child are healthy as Corona passed the one-month anniversary of her birth.

To keep the birth of the baby giraffe in Bali “natural” and as free from stress as possible, the team of veterinarians monitored the birthing process by CCTV camera, ready to move in only if complications appeared during the birth.

Sophie experienced contractions for 2 hours before her healthy, long-legged daughter made her nativity appearance. Unceremoniously ejected from the birth canal, Corona was deposited on the ground where her mother revived and reassured her new-born daughter with loving licks delivered by mother Sophie’s 45-50 centimeter long tongue. Doctor Yohana Kusumaningtyas, who led the team of veterinarians attending at the birth, pronounced the birth a success explaining the licking of the baby by the mother, affirmed a close bond between the nursing mother and her daughter.

Giraffes have one of the most prolonged gestation periods among all mammal, with mothers carrying their young in the womb for 14 to 15 months. When Sophie’s keepers initially determined she was pregnant, she was singled out for close daily monitoring of her health and a rich diet for the next 15 months. “We provide the best care and quality foods like carrots, beans, and calliandra leaves for the pregnant giraffes during pregnancy and throughout the lactation period. Baby Corona will nurse and thrive on her mother’s milk for the first four months of her life.”

Corona is a member of the northern giraffe subspecies (Giraffa camelopardalis). The tallest mammal found on the planet; male giraffes, can grow to between 4.8 – 5.5 meters in height and weigh 1,360 kilograms. The female of the species is slightly smaller.

Corona’s birth brings the population of giraffes living at Bali Safari to 5, consisting of two males and three females. The Park’s directors point to Corona’s birth as further proof of their success in fulfilling their role as a conservation agency for endangered animals.

And while the Bali Safari and Marine Park closed 23 March 2020 in keeping with government instructions to prevent the spread of COVID-19, the feeding and care of the more than 100 species who live at the Park has continued unabated.

As shown in the accompanying photos, Corona, like her parents Sophie and Matadi, is adorable in every way and enjoys regular visits by the many zoo workers still on duty at the Park. Veterinarians visit her daily to record her healthy development and ensure she is accepted as a member of the Park’s 5-member “tower” (i.e., group) of giraffes.

Her loving team of keepers are thrilled with their new charge and can hardly wait to introduce her to Park visitors once normal operations resume, once the doors reopen to the public.

Bali Safari Park was opened in 2007 and is a unit of the Taman Safari Indonesia (TSI) Group, which operates animal parks in East and West Java