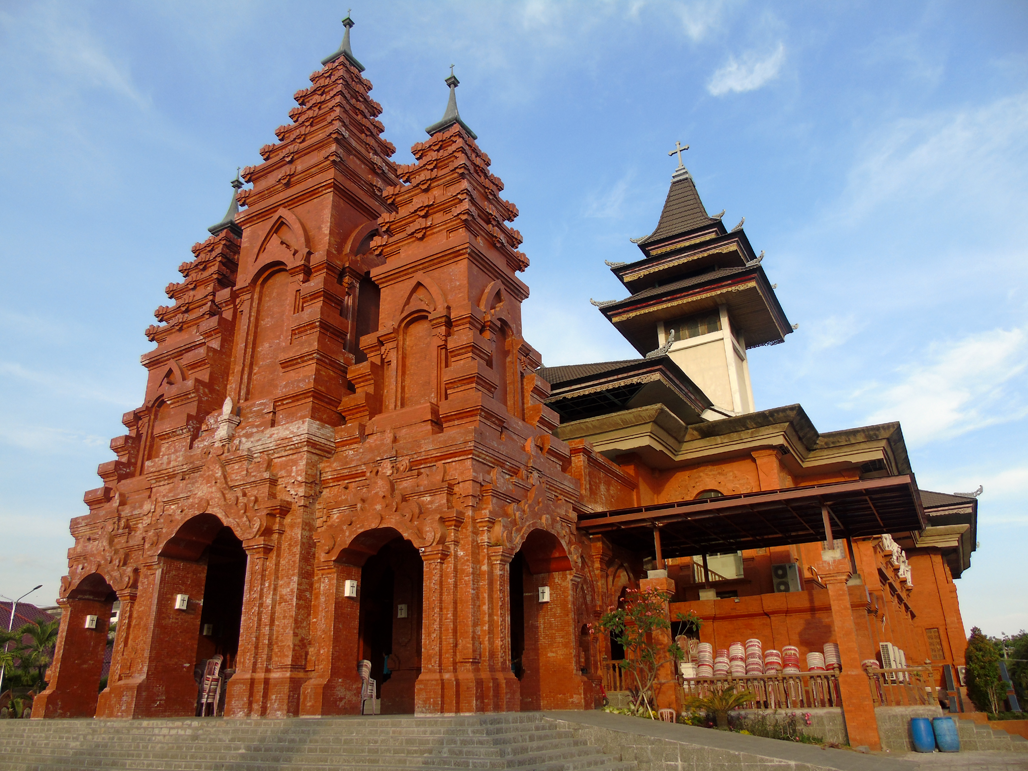 NusaBali reports that Christian churches in Bali’s capital of Denpasar are beginning to hold worship services after a hiatus dating from the onset of the global pandemic.

Churches in Bali began to hold regular service starting in early July, including the Roman Catholic Cathedral of the Holy Spirit (Roh Kudus) in Renon, Denpasar, where parishioners are now again worshipping together in groups.

Masses at the Cathedral are being conducted under Health protocols established by the government. Vitalis Alexander, the chair of the Task Forces Against COVID-19 for the Renon Cathedral, on Saturday, 29 August 2020, said, “The Parish Priest has held an audience with the Regional Government of Badung, the COVID-19 Task Force for the Province of Bali, the Municipal Government of Denpasar, and even the ‘banjars’ and villages that surround the Cathedral.”

The total number of worshippers is limited to between 500-540 at each mass held in the Cathedral that can accommodate up to 2,500 worshippers in normal times. Vitalis added: “We have also received a video on health protocols from the Minister of Religion. It has become the case that our church can now be said to have become an example and role model for other churches.”

Five separate masses are held each week on Saturdays and Sundays to allow parishioners to find a time to their convenience. Attendance is controlled at the door, and once the allowable limit has been reached, no more worshippers will be granted admission. Those wishing to attend mass are asked to come as early as possible to ensure they secure seating. At the Renon Cathedral, the most popular masses are held at 10:00 am and 6:00 pm on Sunday.

Outside the church’s entrance, places have been prepared with water and soap for washing hands.

Everyone attending a mass must undergo a thermal temperature scan and are require to wear a surgical mask.

Those registering a temperature above 37 degrees Celsius will not be admitted to the church and will be referred to medical personnel standing by at the church.

GBI Rock is allowing a maximum of 94 worshippers at each of their services. The church elders are reviewing the possibility of holding a second service to handle those unable to obtain seating at the first service.

Reverend Putera said the COVID-19 precautions are having a significant impact on the traditions of worship and fellowship. While in the past, worshippers would gather for fellowship after a religious service, they must now directly return home when the service is concluded. Post worship friendly gatherings that were once a highlight of attending church on the weekend are no longer possible.

The church service itself is mostly unchanged except that the pace of worship has been shortened and accelerated.

Reverend Gideon said face masks and face shields are limiting the style of worship. Gideon has urged members of his congregation who wish to attend church to be conscientious and safeguard others by never lying when registering at the door when asked to declare they are healthy and have no symptoms of COVID-19. Adding: “Please believe that God’s servants are doing their very best so we can worship properly and comfortably. There is no need to worry if you want to come to church. Please follow the Covid-19 Task Force procedures, which have become the ‘New Normal’ in our lives. That’s the main thing.”