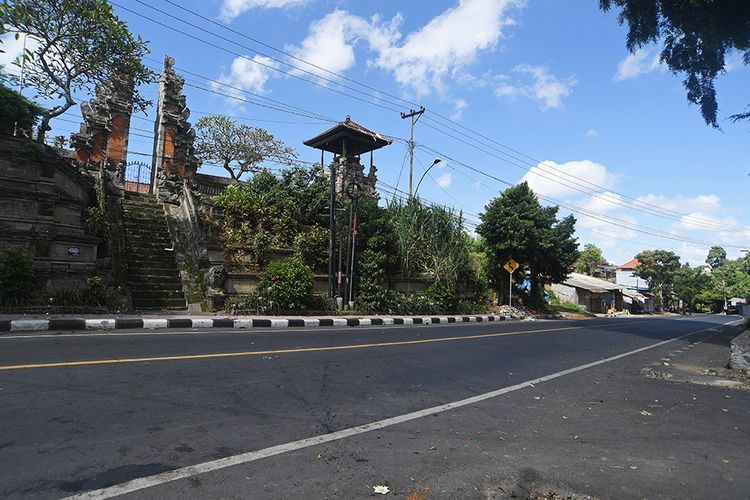 Bali marked Hari Raya Suci Nyepi Saca 1943 on Sunday, 14 March 2021. Occurring on the Balinese calendar once every 210 days, Nyepi is a day of absolute silence in which seaports and the airport are closed for 24 hours. All Island residents are expected to spend the entire period – from sunrise on 14 March until dawn the following day – in shuttered houses with the lights off.

The Bali-Hindu tenet of “Catur Brata” stipulates that devout Balinese during Nyepi must obey the four chief prohibitions of “Amati geni” (not igniting any fire or lighting), “Amati Karya” (to refrain from work), “Amati lelungan” (to not venture outside the home), and “Amati lelanguan” (to not partake in pleasurable activities and entertainment).

As reported by Beritabali.com, historical records from a stone megalith found at Trunyan prove Nyepi and Galungan have been celebrated in Bali since the 8th century AD.

During the height of the Majapahit Empire, Nyepi was known as Caitramaisia. Other historical records show Raja Waturenggong showed the observance of Nyepi in Bali was widespread in the 13th and 14th Century AD.

Starting from ancient times, Nyepi is held during a dark moon closest to 21 March 2021. It is a day set aside when offerings and prayer are made to the Almighty (Ida Sanghyang Widhi) to plead for peace and tranquility in the natural world.

The earliest marking of Saka took place in South India in 78 AD. The Government of India continues to celebrate Saka simply every 21st day of March.

More recent records of Nyepi in Bali include 1936 when, according to Beritabali.com, a car carrying Europeans traveling the streets of Bali on the “day of silence” was stopped by pacalang for having infringed on the sacred traditions of Nyepi.

The Europeans’ driver boldly told the local enforcement team that his passengers were KPM employees (Koninklijke Paketvaart Maatschappij) – The Dutch Shipping and Passenger Line connecting Holland with a domestic shipping route between Java, Bali, and Sulawesi. In 1928, KPM built and operated The Bali Hotel in Central Denpasar for many years, Bali’s most opulent accommodation.

When the pacalang heard the passengers breaking the code of silence were working for KPM, they withdrew in fear of angering the colonial overlords.

This story from 1936 was purportedly told by the legendary anthropologist Dr. Margaret Mead who was traveling in the car with her anthropologist husband, Gregory Bateson.

After arriving in Bali, Mead and Bateson traveled to Ubud to meet Walter Spies, a painter, and director of The Bali Museum. In Ubud, with introductions from Spies, the two American anthropologists met Beryle de Zoete, the co-author of the authoritative Dance and Drama in Bali with Spies published in 1937.

Mead and Bateson focused their anthropological research in the Bayung Gede area of Bangli, producing the book “Balinese Character: A Photographic Analysis” in 1942.

How Nyepi was celebrated was influenced by the prevailing political atmosphere in force at the time. During the colonial period, all power rest with the colonial rulers, but after the resolution that won Indonesia its independence, Nyepi was nuanced with revolutionary feelings and nationalism.

Reflecting a highly politicized period in Indonesian history, a Nyepi advertisement placed in a local newspaper by Bali’s Governor in 1966 combined wishes for Ida Sang Hyang Perama Kawi’s blessings with a call to “win” the revolution aimed at creating a just and progressive nation.

Also, in 1966, the Bali Association of Indonesian Importers and Exporters (PT GIEB) place an advertisement inviting the public to enhance their vigilance in the revolution to alleviate the suffering of the people.

In the past, how Nyepi was honored varied both in time and place. Rules regarding turning off lights and illumination were generally observed, but other laws demanding people stay at home and not travel were not universally respected. In some villages, the residents would congregate on the roads and streets that had suddenly become free of cars, motorcycles, and bicycles. When pacalangs suddenly appeared, people would retreat to their homes until the traditional enforcers moved on, only to return for block parties on the roads.

Nyepi has also been an occasion for criminality. During Nyepi of 1970 that fell on 09 March, the Toko Djaja Agung on Jalan Gajah Mada in Denpasar was robbed. The shop that specialized in selling wristwatches lost 89 watches.

The following day, the robber was caught by a State Prosecutor in Tabanan who thought the thief’s behavior suspicious. The unfortunate thief offered the prosecutor a new watch at a very special price. When the man was searched, a large cache of watches stolen from Toko Djaja Agung was discovered.

It was only on Nyepi held on 20 March 1969 that the Regent of Badung and the Governor of Bali rejected Garuda Indonesia’s request to operate flights to and from Bali on the day of silence. The National Airline was told that they were welcome to transit Bali but would not be allowed to disembark or embark passengers during the Nyepi period. It has now become traditional that all flights are diverted away from Bali’s airport on the official day of silence.