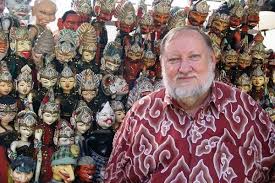 Balidiscovery.com shares the sad news of the death of a long-time friend, Gregory Churchill, an American expatriate in Indonesia, at the age of 74.

Churchill died at the Mayapada Hospital in Jakarta in the early hours of Saturday, 19 February 2022, after suffering for years from the chronic illness myasthenia gravisa.

A memorial service attended by friends and colleagues took place on the afternoon of the same day as his death at his residence on Jalan Gelagah, Pisangan Ciputat Timur, Tangerang Selatan.

Arriving in Indonesia in 1976, Churchill, the newly-minted law graduate, commenced a 30-year relationship with the University of Indonesia, where he initially worked as a consultant to the Legal Documentation Center until 1986, also serving as a lecturer on American Law at Indonesia’s leading university from 1978-2004.

For 26 years from 1981 until 2007, Greg Churchill worked as a legal counsel at the prestigious Indonesian law firm of Ali Budiarjo, Nugroho, Reksodiputro where he provided legal advice to private companies on contracts, corporate governance, investments, mergers, acquisitions, trade, licensing and other technical matters. During this period, he provided invaluable guidance on appropriate legal structures to private foundations working in culture education, the environment, and advocacy programs.

From 2007 to 2016, Churchill worked as a Senior Advisor at PT Adinata Pandita counseling on enterprise development, investment, and foundation governance program development.

Other major consultancies included assistance to the International Monetary Fund (IMF), where he consulted a joint Netherlands-Indonesia program on legal and judicial reform (2008-2010). This work included bankruptcy reform, court reform, and the establishment of a Commercial Court and the Anti-Corruption Court (1998-2005). Churchill also consulted on legal and judicial reform to the World Bank (2000-2001, 2005-2006) and the Australian Agency for International Development (2001-2003).

Gregory Churchill was held in such high esteem by his colleagues within the Indonesian legal community that he was made an honorary member of the Assosiasi Advokat Indonesia (AAI) in May 2006.

Churchill retired in 2016, dedicating much of his time to keeping up with his almost countless friends from every walk of life in Indonesia and curating one of the world’s largest private collections of traditional “wayang golek” puppets.

Churchill was a frequent visitor to the Island of Bali.

Gregory Churchill is survived by two sisters – Martha Bohn and Barbara Chrurchil and three nieces – all living in the U.S.A..

Gregory is also mourned by his Indonesian family of Kamdan bin Kaswi (Mas Dani) and his wife Eli, together with their children and grandchildren.