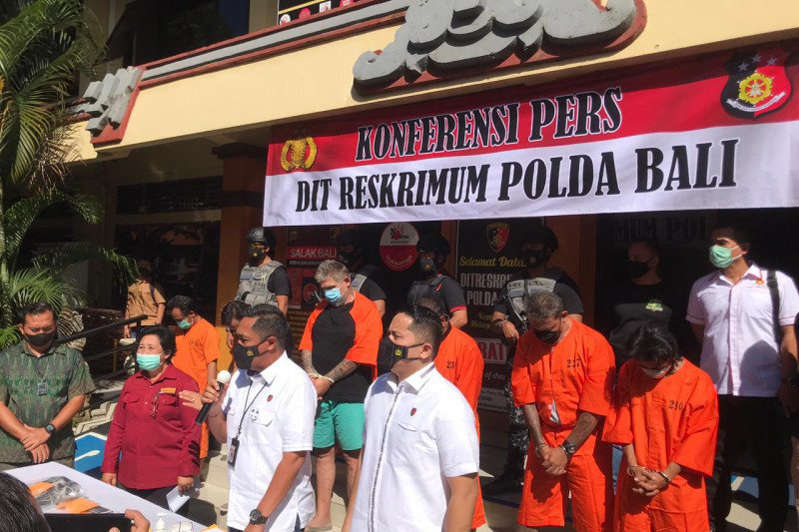 A Russian national is under arrest in Bali under a charge of extortion. Evgenii Bagriantsev (55) was charged for posing as an Interpol officer trying to demand money from Nikolay Romanov (42), a citizen of Uzbekistan.

As reported by RadarBali.com, Bagriantsev demanded Rp. 230 million from Romanov, who operates a motorcycle rental business. The Russian threatened the Uzbekistani that he would report the man to the Bali Police Headquarters for various fabricated legal problems. The threats came in multiple ways, including messages sent to Romanov by WhatsApp on 22 May 2021.

Ironically, the very police Bagriantsev threatened to deploy against the man from Uzbekistan finally arrested the Russian on Thursday evening, 01 July 202 at 9:00 pm.

Bagriantsev told Romanov that he would tell the Bali police that the Rental Good Bike Company located on Jalan Batubolong, Canggu, North Kuta, did not have the necessary operating permits and was operating as a front for narcotics transactions. Moreover, the Russian “fake cop” threatened Romanov with four years in prison and a fine of Rp. 400 million.

However, the Russian impersonating an Interpol Officer told his victim that his silence and cooperation could be had with the payment of Rp. 230 million. Fearing for his freedom, Romanov paid the demanded money in cash and bank transfers. In addition, the Russian demanded and received a motorcycle as a part of the blackmail payment.

Increasingly suspicious, Nikolay Romanov contacted the Bali police, who confirmed they had no reports of an illegal business operation fronting in the sale of narcotics. A formal police complaint against the Russian was filed at Bali Police Headquarters on 01 July 2021. (Reports Number LP/B/403/VII/2021/SPKT/Polda Bali.)

Police confirm that Evgenii Bagrianstsev was caught in a sting operation in the parking lot adjacent to Pepito Express on Jalan Raya Kerobokan while receiving a payment from the victim.

According to police, Nikolay Romanov had been extorted a month earlier by two Russians using a modus operandi similar to that employed by Bagriantsev. On 17 February 2021, police tell how two Russians named Olga Bagriantsev and Maxim Zhilton came to Romanov’s rental agency to request vehicle details on a motorcycle sold to the company by a certain Dimitri Barbaev. The two claimed to be collecting information to make a police report and successfully demanded that 21 motorcycles be handed over to them.

In the end, Romanov handed over the 21 motorcycles and vehicle registrations to the two Russians.

Bali police are currently seeking the whereabouts of Olga Bagriantsev and Maxim Zhilton.