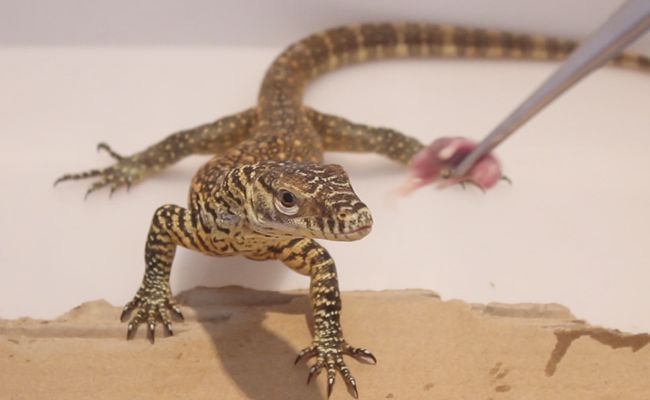 Sixteen rare and endangered Komodo dragons have recently hatched at Bali’s Safari and Marine Park, located just north of the capital city of Denpasar. The births represent the first time the captive-bred Varanus komodoensis – the world’s largest species of monitor lizard, have been born in Indonesia.

Endemic to a group of Islands within the Komodo National Park in East Nusa Tenggara, the Komodo Monitor can grow in the wild to a length of 3 meters and weigh 70 kilograms.

Dr. Yohana Kusumaningtyas, a member of the veterinarian team at Taman Safari, told the press, “At this time, the condition of the newly-born Komodo dragons is that they are healthy and active.” Dr. Yohana said the dragons first emerged from the nest in early March. The total number in the “bank” of new lizards born at the Bali Taman Safari is 16.

Less than one month old, the baby lizards are receiving intensive care from a team of experts. The dragons are fed twice each week with the amount of food adjusted according to their developing body weight. The newborn dragons are weighed and physically examined each week.

Within their natural habitat at the Komodo National Park, the reptiles are apex predators preying on the vast and almost entire range of wildlife found at the National Park. A primary food source for the lizards is the Javan Deer (Rusa timorensis) and carrion. There are rare reports of attacks on humans by the Komodo Dragon.

The recent birth of the 16 dragons at Taman Safari largely reflects the know mating practice of the reptiles in the wild. Komodo couplings typically occur between May and August, and a female Komodo will lay up to 20 eggs in a nesting hole where they incubate for seven to eight months. The March birth of this new bank of dragons indicates insemination occurred in July or August of 2021.

In the wild, newborn dragons vulnerable to attacks, including cannibalistic attacks, will spend much of their first years living arboreally. A dragon matures as an adult in 8 to 9 years and can live for 30 years.

Protected under Indonesian law, the Komodo Dragons are officially listed as “endangered” on the IUCN Red List (International Union for Conservation of Nature) and protected under Indonesian law. The main threats to the continued existence of this species are the natural vulnerability resulting from their limited geographical range, natural disaster, changes to the local ecosystem resulting from human incursions, and climate change.

A controversial major renovation of the Komodo National Park is now underway, including viewing stations and reintroducing feeding depots. Baiting and feeding the dragons is a practice long abandoned as damaging to the natural hunting instincts of the reptiles.