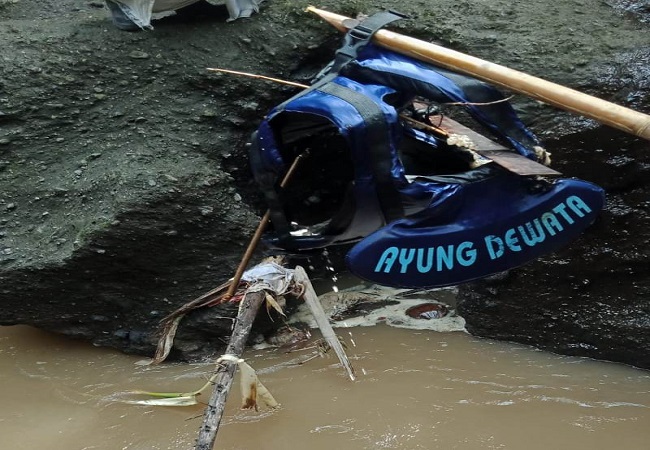 A 64-year-old American, Clifford Neil Robinaugh, is missing and presumed dead on the Ayung River near Tanggayuda Village, north of Ubud. The American had joined a white-water rafting trip on Tuesday, 04 October 2022, traveling in a group of ten, when his raft, carrying five people, flipped in one of the fast-moving rapids at approximately 4:45 pm.

When Robinaugh did not immediately resurface and rejoin the raft, the guide and other passengers did a local area search in and along the river for the American. The search party was quickly joined by the Search and Rescue division of the Bali police, the Badung Police Precinct, and Gianyar Regency officials. The search was suspended at sunset and resumed on Wednesday morning.

Quoted by RadarBali.com, the spokesman of the Bali Provincial Police, Stefanus Satake Setianto, confirmed that search parties had found a life vest on the river. A photo published in RadarBali.com showed a life vest bearing the name of the “Ayung Dewata” rafting company was recovered by searchers.

On Wednesday morning, the search for the American continued. Police and searchers, based on past tragedies on the river, expect the man’s body to be discovered on Wednesday.

The man was part of a 10-person group of foreign nationals traveling the river on two inflatable rafts. The trip commenced in the Banjar of Begawan in Payangan and was targeted to end in Payangan opposite the Hotel Royal Pitamaha.

Local reports suggest heavy rain began to fall during the trip which often results in rapid increase in the ferocity of the river’s rapids.