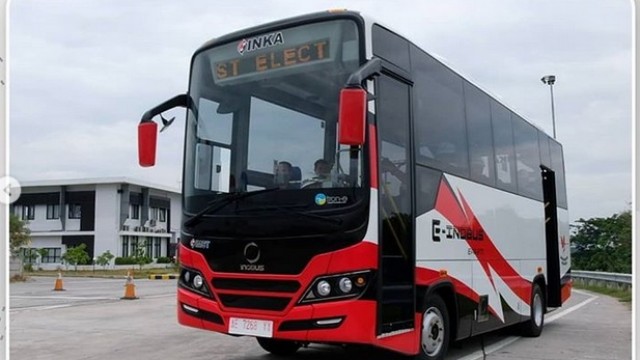 The Provincial Government of Bali has launched a new electric bus service in Bali in a ceremony held at the Governor’s Residence in Denpasar on Friday, 06 November 2020.

As reported by Tribun-Bali.com, the head of the Provincial Transportation Authority, I Gde Samsi Gunarta, said the trial operation of electric buses in the Strategic National Tourism Zone (KSPN) follows a decision by the Director-General of Land Transportation.

The electric bus system will only embark and disembark passengers at fixed points along the declared routes.

In addition to the above island-wide bus system, an electrified shuttle bus service is planned in Bali’s centralized government administrative zone. The shuttle bus will connect government offices in Renon to Jalan WR Supratman to the Provincial Police Headquarters, the Indonesian Arts Institute Denpasar (ISI), the Warnadewa University before returning to Renon.

Samsi underlined that the electric buses’ initial operation plans are intended to trial the buses in various applications in Bali.

Indonesia’s Ministry of Transportation is funding the new bus services with buses provided by the Bali Development Bank (BPD), PT INKA (The Indonesian Train Service), and PT Build Your Dreams.

As a move to popularize the new service, the buses will operate without charge until the end of 2020.

Kompas.com reports that the new Electric Bus System is part of a more ambitious program by the Government of Indonesia to introduce electric buses, elevated suspension cars, and trams in various locations across the Island. The overall Bali Transportation network’s tram element will include a 7-kilometer long system in Kuta and a 12-kilometer system in Sanur.

The tram system is funded by the Indonesian Rail System (PT INKA) supported by the Islamic Development Bank (IDB) headquartered in Jeddah.

Part of the project is the construction of a workshop costing Rp. 2.6 trillion.