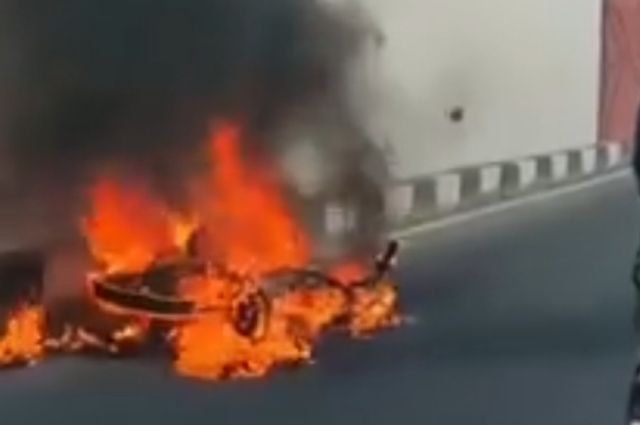 A 25-year-old man, “Ribut” narrowly escaped serious injury and death when the Yamaha Jupiter motorcycle he was using to transport 3 jerry cans containing 94-liters of gasoline caught fire on Monday, 24 August 2020, at 9:30 am.

The accident occurred when the gasoline-laden motorcycle caught fire while traveling via the underpass beneath the Ngurah Rai Statue at the entrance to Bali’s Ngurah Rai International Airport. Police theorize that the gasoline seeped onto a hot exhaust pipe on the motorbike where it ignited into a blaze.

As reported by Tribun-Bali.com and NusaBali, Ribut, originally from Banyuwangi, East Java, but who now lives in the Ubung area of North Denpasar, had earlier in the day filled three jerry cans with Dexlite gasoline purchased in Kebo Iwa for delivery to an address in the Pecatu area of South Kuta.

While traveling to Pecatu, Ribut’s Yamaha motorcycle started to pour forth flames while passing through the underpass. The man immediately stopped the bike and, fortunately, had the presence of mind to remove the three jerry cans filled with 94 liters gasoline to a safe distance from the smoking motorcycle. Moments later, the motorcycle burst into flames that completely destroyed the vehicle, leaving only the charred frame of the motorcycle sitting on the side of the main highway.