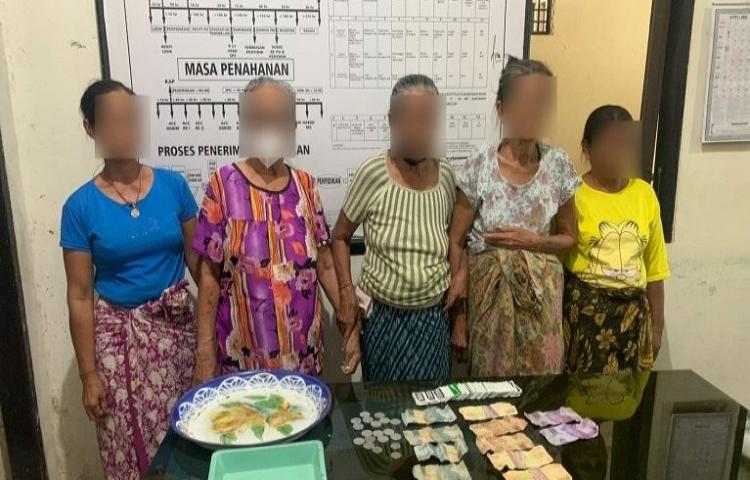 Today, while many members of Indonesia’s younger generation are involved in trading cryptocurrencies or trading shares online, older people engage in card games that include, among others, dominoes, Remi and “Koa” and “Ceki.”

The game of cheki that is played nationwide traces its roots to a card game popularized in West Sumatra’s Minangkabau Region. A simple entertainment to while away the time, ceki is sometimes enlivened with small bets comprised of single cigarettes,cups of teh talua – a West Sumatra version of eggnog, or small amounts of money.

A particularly popular game among womenfolk, ceki games are played in simple huts and garden pavilions in an atmosphere filled with laughter and community gossip.

Be that as it may, gambling is illegal under the laws of Indonesia.

Five grandmothers were taken into custody by police after being arrested in the Village of Batu Mekar, West Lombok, after being caught playing ceki in a gazebo on Thursday, 07 April 2022, during the Muslim fasting month. Now under police detention are five grandmothers, only identified by their initials, WK (75), NR (54), KS (57), WT (80), and IWU (81).

The head of the Lingsar Police Precinct, Iptu Riski Merika, told the press on Friday, 08 April 2022, “After the ‘raid’ by police, the five women were immediately taken into custody, suspected of committing the crime of gambling.”

The press reports that when the five aging gamblers were arrested, they only managed to chuckle and giggle as police escorted them to jail.

“We have arrested the suspects together with the proof of their crime that includes playing cards and a sum of cash,” said policewoman Iptu Riski Meirika. Police also confiscated Rp. 64,000 in cash (approximately US$4.50).

Under interrogation, the five women freely admitted they were playing a game of ceki, claiming they were only having fun.

“Even if they were just having fun (iseng-iseng), what’s gambling is gambling,” retorted Policewoman Iptu Riski Meirika.

The women now sit behind bars awaiting a final decision by police on whether to refer their case to State Prosecutors charging them under Section 303 of the Criminal Code (KUHP) with an offense carrying a maximum penalty of 10 years in prison.

Yan Mangandar Putra, a public defender from the Law Faculty of the Mataram University, sent a WhatsApp message on Saturday, 09 April 2022, to BeritaBali.com that he had personally seen the five women on the second floor of the jail building having a meal. Saying he hoped the case could be settled with restorative justice, Yan Mangandar added: “It’s a shame that at their age (these women) must be involved with the police.”

Saying the women were involved in a victimless crime, he insisted that how the matter is finally settled is entirely in the hands of the police.

The pro-bono public defender specializing in children’s cases urged the police to finish the case with a simple fine or some other moderate sanction.

“In the instance of the gambling case committed by the grandmothers, he said the police should implement Restorative Justice by involving both religious leaders and community leaders from where the perpetrators live,” said Yan Mangandar.

Ask to comment further, Officer Meirika said that the matter remains under investigation.

Meanwhile, the public can sleep soundly knowing the five grandmothers reside behind bars.