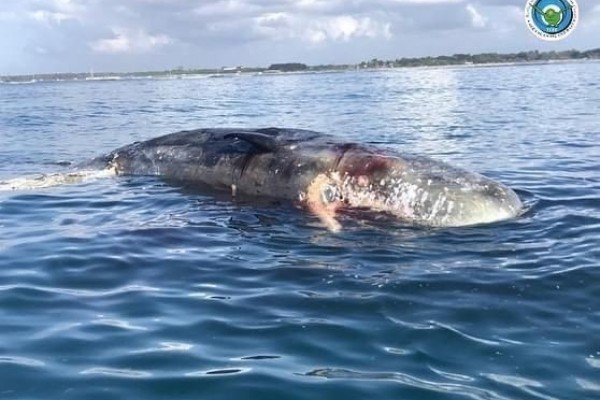 The corpse of a 10-meter-long 2-ton sperm whale (Physeter macrocephalus) washed shore near the public pier on Serangan Island, near Sanur, Bali, on Tuesday, 17 November 2020.

Sperm whales are the largest toothed predators in the world. The whale discovered in Bali had already begun to decompose with visible evidence of numerous wounds to its body, possibly due to carrion-predation.

As reported by Radar Bali, the head of the Agency for the Management of Shoreline and Ocean Resources in Denpasar (BPSL-Denpasar) coordinated a team to remove the whale’s remains to a more remote location for eventual burial on land or at sea.

The BPSL Chief said it is difficult to pinpoint the cause of death, which may have resulted from illness, sonar-disorientation, or a collision with a ship. Experts will examine the whale’s body to see if a possible cause of death can be identified.

Adult males can reach a maximum length of 20.7 meters and weigh up to 80 tons. Females are somewhat smaller. The hunting of sperm whales for sperm oil was a major global industry in the 19th century, popularized in literature as the nemesis of Captain Ahab in Herman Melville’s 1851 novel Moby Dick.

Now classified as a threatened species, it is listed as “vulnerable” under the International Union for Conservation of Nature.

The International Whaling Commission granted full protection to sperm whales in 1988; Japan’s commercial whale hunting continued until 1988 and resumed again in July of 2019.

Before formally resuming commercial whaling and under the guise of “research,” Japan took 51 sperm whales during an 11-year period starting from 2000.

Claiming whale meat consumption is an intrinsic part of Japanese culture. Japan quit the International Whaling Commission in July 2019 and now hunts whales in Japanese territorial waters, killing up to 1,200 whales every year.