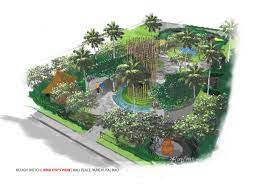 Nearly 20 years after a terrorist bomb killed 202 people and injured scores of others on 12 October 2002, the owner of the 560-square meter plot at Jalan Legian No. 66 in Kuta, once home to the ill-fated Sari Club, has reportedly agreed to sell the land for Rp. 45 billion.

Should the final sale go through, it will pave the way for ta memorial park to honor the victims of the bombing in the middle of the traditionally busy heart of Kuta’s nightlife zone.

MSN.com. detik.com, and many Indonesian news outlets report that Indonesian businessman, Sukamto Tjia, has signed “an agreement to sell” the plot of land at the agreed price equivalent of around US$5,800 per square meter.

The document signed by Sukamto is not a sales agreement but a formal offer to sell the land providing the payment of an amount equivalent to around US$3.2 million is paid before the end of March 2022.

In 2019, Australian Prime Minister Scott Morrison promised to consider government assistance in the purchase if a “ballpark figure” price agreement was already in hand.

Should the funds be secured in time for the fast-approaching deadline, it would mark the end of two decades of disputes and discords surrounding the controversial project. Internal arguments within the BPPA on how to continue with efforts to secure the site precipitated the resignation and departure of the group’s Australian founder, Dallas Jackson-Finn, who decided to go it alone and try to negotiate a deal for the parcel of land with its Indonesian owner.

Quoted by MSN.Com, Jackson-Finn said: “We’re coming up to the 20th anniversary, so I think that will be of great significance to have that park there instead of looking at a vacant block of land.” Continuing, Jackson-Finn added: “It’s prime commercial real estate. We’ve factored in the loss of income, compensation and it works out at about 17 cents per Australian.”

Jackson-Finn and the BPPA once envisioned creating a beautiful meditative garden on the side of a normally busy street in a now-vacant lot bordered on three sides by shops. The vacant lot is located only a few meters away from the Ground Zero Monument where the names and nationalities of the 202 people who died in the 2002 bombing are inscribed. Another short distance away stands the reopened Paddy’s Bar that was also targeted by the bombers.

Back to the questions at hand: Will the substantial sum of money be found before the March deadline, together with the additional amount needed to build and develop the peace park? The question also arises on who would become the “new owner” of the park proposed for the vacant lot?

Prime Minister Morrison’s offer “to consider” the project is far short of a firm commitment from the Australian government to underwrite the entire amount needed to close the deal. In the past, former prime ministers, Julia Gillard and Kevin Rudd, both pledged US$450,000 towards plans to purchase the Sari Club site. Further promises of support were also made in the past by Australian territorial governments. Whether these past pledges still stand remains unclear.

The federal opposition in Australia is lobbying the government to expend “sufficient funds in the budget” and work with the government of Indonesia and other stakeholders to secure the plot before the end-March deadline so plans for the park can proceed as the 20th anniversary of the October bombing draws nigh.

A parliamentarian backbencher, Luke Gosling, stated that the 88 Australians who died and the many more injured in the 2002 bombing “must not be forgotten.” Gosling added: “The bombings were horrific. Australia and Indonesia have a long history together and it’s in the national interest to have a Bali Peace Park built on the Sari Club site as a living memorial.”

The ability to close the deal and build the proposed peace park is further complicated by the BPPA’s dissolution. Before its dissolution, a BPPA spokesperson declared it had “terminated its interest in acquiring the land following prolonged negotiations and has indicated that Australian government-committed funds would not be required.”

Before dissolving the association and abandoning the Bali Peace Park Project, the BPPA had accused the owner of the plot of making “outrageous” demands for a sales price far in excess of the land’s commercial value.

During the negotiation with the owner, the estranged BPPA founder, Dallas Jackson-Finn, surprisingly came to the defense of the Sari Club plot’s owner offering a price that included compensation for lost revenue over the past two decades in addition to the cost of purchasing the land. Jackson-Finn took issue with the BPPA for depicting Sukamto Tjia and his son, Ronald, as “greedy,” claiming the land’s owner was a businessman entitled to fair compensation in the proposed sale and any lost income over the past two decades.

The current design for the Bali Peace Park Association (BPPA) includes a mural depicting the tragedy and a “reflection corner” where visitors can pause and quietly reflect on the event and its victims. Assuming money needed to purchase the site can be secured before the end of March, further questions arise on who or what organization will be the legal new owner of the land and where additional funds will come from for the development, and perpetual can and maintenance of the park.