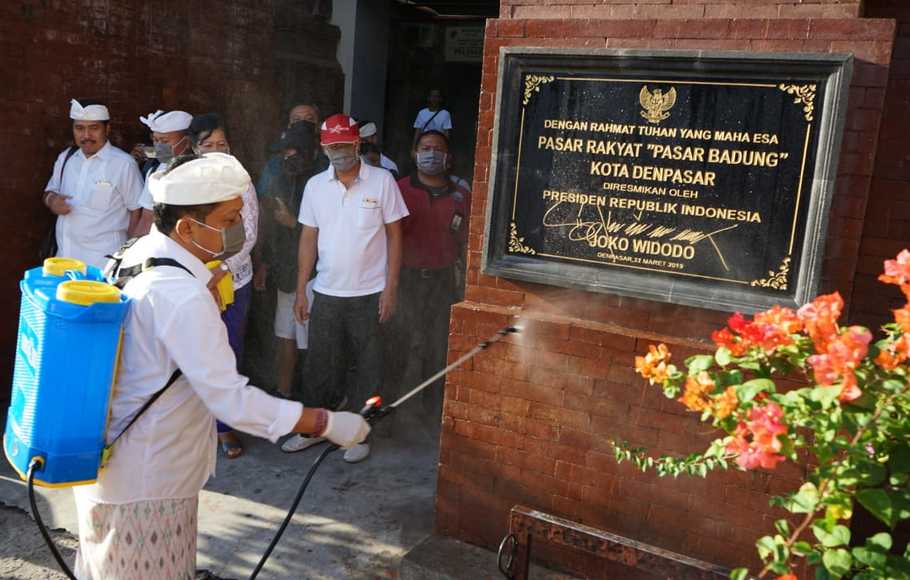 As reported by NusaBali, Bali’s Governor Wayan Koster continues to give his full attention to the recent increase in “positive” COVID-19 tests in the Island’s capital of Denpasar, most associated to cases of local transmission.

To support efforts underway by Denpasar’s Mayor, Governor Koster, who also serves as the chairman of the Bali Provincial Task Force for the Mitigation of COVID-19, has ordered the formation of small specialized teams to tackle the recent spike in new infections.

The recent increase in new COVID-19 infections in Denpasar prompted Governor Koster to convene a meeting with Mayor IB Rai Dharmawijaya Mantra and Deputy-Mayor I Gusti Ngurah Jaya Negara, on Thursday, 11 June 2020. That meeting, held in the Governor’s office, was also attended by the Provincial Secretary of Bali Made Indra in his capacity as person-in-charge of the Provincial COVID-19 Mitigation Task Force, the Secretary for the Municipality of Denpasar AA Ngurah Rai Iswara, and several related government bodies and agencies.

During the gathering, Governor Koster noted that there had been an increase in infection rated for COVID-19 over the preceding three weeks. This increase in new cases was dominated by local transmission of the disease.

To express solidarity with the City of Denpasar, Governor Koster said: “We truly understand that the conditions in the City of Denpasar are different from other regions. As the center of Government for the Province, the people are heterogeneous, and the amount of traffic exchange between Bali regencies is also high. It is, therefore, appropriate that this fact becomes a matter of common concern.”

The heads of the various regions that comprise the Province of Bali have agreed to remove restrictions on unrestricted movement on an island-wide basis. Because Denpasar represents the center of provincial activities, Bali’s reopening in conjunction with other areas of the Province represents a shared interest and responsibility for the entire Island. Accordingly, the Governor directed the Provincial Secretary and working chairman of the Provincial Task Force for COVID-19 Mitigation, Made Indra, to create a small team to consider concrete steps that can be taken to reduce the contagion rates in the Capital.

Meanwhile, the Mayor of Denpasar, IB Rai Mantra, confirmed that following the recent spike in new cases of COVID-19, the Municipality has undertaken extensive testing of the public, abandoning rapid testing in favor of the more definitive swab tests.

According to Denpasar’s Mayor, almost all of the villages that comprise the Municipality are now limiting unrestricted movement and imposing physical distancing protocols. Despite such measures, the public is nonetheless becoming increasingly mobile with many new cases of COVID-19 occurring in Denpasar now being traced to people coming from areas outside the city limits.

The working chairman of the Island’s COVID-19 Task Force, Dewa Made Indra, said that in addition to limitations on public activities, mass testing is needed to determine the actual rate of infections in Denpasar.

Inra admits that more testing will most probably result in higher reported cases of positive infection; it remains a necessary step to determine the true extent of the disease.

Dewa Indra assured the Municipality that the Province is prepared to provide support in supplementing the capacity of hospitals to treat COVID-19 patients and enhance the strength of surveillance teams, strengthened with manpower from the Province and Regencies, as required.