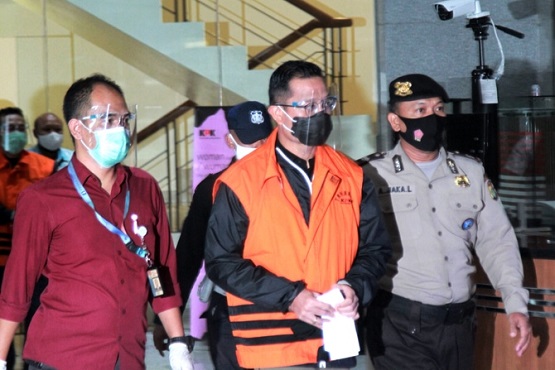 Indonesia’s ousted Minister of Social Affairs, Juliari Peter Batubara (49), has been sentenced by a Jakarta Court to 12 years in prison and fined Rp. 500 million for accepting bribes amounting to Rp. 32.482 billion from 109 companies contracted to provide essential food relief to people affected by the COVID-19 pandemic in the Greater Jakarta Metropolitan Area.

Batubara, who served in his ministerial post until December 2020, was charged with corrupting public relief funds by the National Anti-Corruption Agency (KPK) for receiving a payment of Rp. 10,000 from every relief packet distributed in the Jakarta-Bogor-Depok-Tangerang-Bekasi metropolitan region. The former Social Affairs Minister was charged with corruption together with four others from the Ministry and the private sector.

The case precipitated widespread public outrage, with some sources calling for the implementation of the death penalty for corruption in a time of national emergency. At trial, KPK Prosecutors sought a sentence of 11 years imprisonment and an Rp. 500 million fine. The panel of judges took the somewhat unusual move of imposing the heavier penalty of 12 years in prison in addition to the Rp. 500 million fine.

Juliari Batubara was also ordered to pay damages to the Nation amounting to Rp. 14, 597,450,000. A failure by Batubara to pay the Rp. 14.597 billion fine will result in the State seizing his asset to satisfy the damages. Should the proceeds from the sale of the disgraced Minister’s assets be insufficient to satisfy the fine, an additional two years imprisonment will be added to the current sentence.

The Court ruled that Juliari Batubara, in his capacity as Minister of Social Affairs from 2019, received illegal payments totaling Rp. 1.28 billion from Harry Van Sidabukke, Rp. 1.95 billion from Ardian Iskandar Maddanatja, and Rp. 29.252 billion from various other suppliers.

The bribes were received by Matheus Joko Santoso, who served as an official to Compose Agreements (PPK) to procure essential foodstuff relief from April to October 2020. Also receiving illegal payments was Adi Wahyono, who headed the Public Bureau of the Ministry and drafted appointment agreements from October – December 2020.

The Judge ruled that Juliari was proven to have ordered Matheus Joko and Adi Wahyono to request a “commitment fee” of Rp. 10,000 per each care package prepared by essential foodstuff suppliers.

The presiding Judge Joko Subagyo stated in the official verdict: “The actions of the defendant recommending and directing which companies should supply essential basic food supplies during the COVID-19 crisis,  intervening in the process to prevent the technical team of the Ministry from properly undertaking supplier selection resulting in unqualified companies working in the supply chain.”

The Court said a “fee” of Rp. 14.7 billion was received by Jiliari Batubara via Matheus Joko and Adi Wahyono, utilizing intermediaries close to the Minister. Those receiving payments were from the Ministry’s technical team, comprised of Kukuh Ary Wibowo, Eko Budi Santoso – adjutants of the Minister, and the Minister’s private secretary Juliari Selvy Nurbaity.

Matheus Joko and Adi Wahyono were found by the Court to have used the illegal fees to pay operational costs of the Minister and other expenses at the Ministry, including the purchase of handphones, COVID-19 swab tests, food and beverage costs, the purchase of a Brompton bicycle, the payment of an honorarium to the Singer-actress Cita Citata, the purchase of animals for religious sacrifice, and the rental of a private aircraft for use by the Minister.