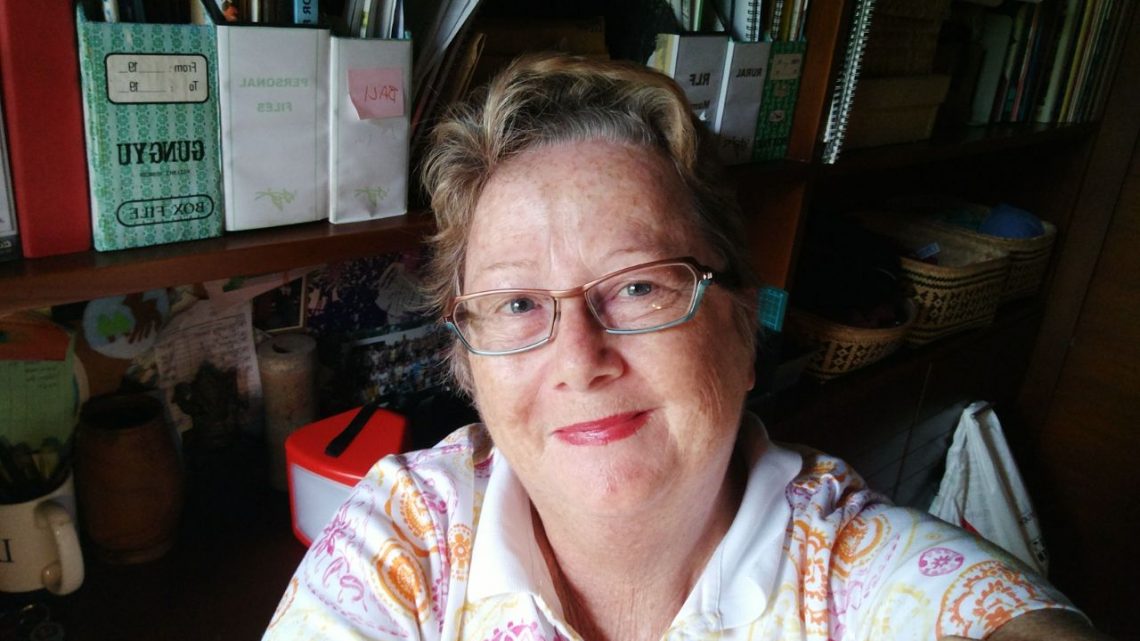 An applied microeconomist and Southeast Asia specialist by training, American Jackie Pomeroy has lived in Indonesia since 1990 when she initially took a one-year contract to work with the Indonesian Ministry of Trade. After seven years, she moved to the World Bank with acquired expertise in domestic trade. She has since undertaken assignments throughout the region and now does consultancies in rural livelihoods and community development.

Jackie is a woman of many parts who has achieved legendary status among social media users via her creation of a Facebook Group focused on the eruption of Bali’s Mount Agung Volcano in September 2017.

More recently, she created another Facebook Group on COVID-19 in Bali.

These Groups address two of the most topical areas of modern Balinese life that are rife with gossips and pseudo-science. Refreshingly different, Pomeroy’s FB Groups provides a reliable, steady stream of science and fact-based information that she shares with thousands of followers.

Because of the quality and consistent reliability of her almost daily reports on Mount Agung and COVID-19, she has become the “go-to-person” for those seeking accurate, up-to-date information on COVID-19 in Bali. Her “friends and followers” on Facebook include not only local Indonesians and expatriates living in Bali but also more than a few Indonesian officials who value her highly informative data and insights.

Balidiscovery.com managed to track down Jackie Pomeroy in California, where she is self-isolating, trying to find flights and a way back home to the hills of Ubud.

Balidiscovery.com: What got you started with all of this?

Pomeroy: I was sitting at my desk crunching numbers for a consultancy 30 km from a newly erupting volcano, about which I knew nothing. The press headlines were absurd, and the rumors and opinions on social media were worse. People were panicking or feeling oddly guilty if they weren’t, and nobody knew what an appropriate response looked like. I do know how to track numbers, so I started tracking seismic activity and finding the real science they underpinned. The whole point was to help give people a real, factual picture of what was happening so they could make sensible decisions. Then I started seeing a similar phenomenon with COVID-19 in Bali – numbers were getting thrown around, and most of the “information” was just gossip, but there was no story, nobody was putting the pieces into a coherent picture. Like most people, I haven’t been working lately, and I figured this would be useful and help keep me sane.

Balidiscovery.com: Are you stuck in the USA trying to find a way back to Bali – your adopted home? What are the complications of traveling during a pandemic that you are experiencing?

Pomeroy: Yes, I’m in the San Francisco Bay Area, and I’m very lucky to be comfortable at my brother’s home. I came back for a family celebration in February, and Taipei closed to my transit flight before I could get back. The airline has been good about sequential rescheduling, but nobody knows when they will start flying again to DPS. I’m now looking at options to get home via Jakarta, but it’s complicated. Up until very recently, it wasn’t possible to get a PCR test here unless I had symptoms.

That’s now possible, but timing is critical. I need to arrive with a negative test taken a maximum of seven days before arrival, and it takes three calendar days to travel to Jakarta from San Francisco. That leaves me four days to get my test results, and the labs are estimating “2 to 5 days.” That’s a narrow window. I know travelers in Bali trying to do the reverse trip are having the same challenge.

Balidiscovery.com: In the last week, Indonesia has earned the unenviable distinction of becoming the leading country in Southeast Asia in terms of confirmed cases of COVID-19, with a recent spike in Bali. Any insights on why this is happening? Is this just the result of more testing, or are the rates of contagion actually on the march?

Pomeroy: That shouldn’t surprise anybody. Indonesia has 2.5 times the population of the next largest country, the Philippines, so it’s not surprising they should have more cases. But the more meaningful questions are the extent of testing in all the nations of Southeast Asia, the general quality of the data, the comparative public health conditions, and different social dynamics. I’m not an expert in any of this, but I can come up with a very long list of questions.

Many people ask if the current spike in numbers is a real jump in infections or if there’s just more testing happening. I don’t have a definitive answer, but I suspect it’s some of both. Indonesia (and Bali) got a very slow start in this race, and we saw how the cases spread across the country after the gathering in Gowa in March. The movement of people with the Idul Fitri holidays – though greatly reduced – was a clear signal. Last week, they recorded an average of 1400 people per day crossing to Gilimanuk, even with all the certificates and letters required.

Everyone predicted case numbers would jump, and they have. At the same time, the Bali Task Force says they have expanded contact tracing and testing from an average of 13 contacts per positive case to double that rate now, and they are also doing more mass testing in targeted areas. So, I think the increase we’re seeing is probably due to both factors.

Balidiscovery.com: Bali is moving towards requiring Swab PCR tests for anyone arriving or departing the island. What the practical implications of such a policy?

Pomeroy: I think there are a number of considerations starting with: is there the lab capacity in Bali to actually do these tests? Already we hear of cases of 5 or 6 days to get results and canceled flights. That means lab capacity could become a de facto rationing mechanism at least to reduce the flow off the island – a kind of Hotel California solution, “you can check out any time you want, but you can never leave.” I don’t think that’s the objective.

With any policy, we need to consider the objective(s), how they would be achieved and weigh those against the economic and distributional impacts. I haven’t heard any of these articulated yet. Few people understand that Bali is a link in a “land” highway that stretches from Java to the eastern tip of Flores and is key to many distribution networks.

Farmers send everything from cashews to salt westward for processing and trade it for instant noodles and everything else that travels eastward.

Traditional markets are clearly emerging as vulnerable spots. But requiring PCR tests along that route could be very disruptive without proper preparation (is it possible to get PCR tests in Flores or Sumbawa?), and all I’ve heard so far is, “Those truck owners make millions on each trip, they can afford to pay for PCR tests.” I also think it would be worth taking a look at who is crossing at Gilimanuk. Based on casual observations, aside from the trucks, the bulk of traffic appears to be (very) small traders shuttling between East Java and Bali. In sum, I think we should carefully consider exactly how the policy would achieve the objective(s), and the range of costs. It could be impossible to implement and end up putting additional pressure on the weakest levels of the economy. And impossible rules are likely to generate “creative” solutions.

Balidiscovery.com:  Indonesia is developing a reopening plan that includes a new concept of “bubble travel.” What do you know about the planning, and do you know what bubble travel will entail?

Pomeroy: The press has jumped all over the reopening plan – fair enough – since it is news. Half the people who read these articles can’t believe Bali won’t be open next week (I ignore those), and the other half think September is much too optimistic. I’m certainly happy the government is actively developing these plans, and from what I’ve seen, the process looks reasonable. The last thing we need is a knee-jerk decision to open. But I’m frustrated that people seem to read only to reinforce their opinions and have largely ignored the Governor’s very clear statements. It’s just a plan to start with; it’s not a schedule that will definitely be implemented. That tells me they are going to take it step-by-step, and I find that reassuring.

I’ve heard more about bubble travel from the national press. As I understand it, bubble travel means that countries with similarly low levels of infection agree to open their borders to each other – and it’s important to remember that immigration borders are national, not provincial. The key is that all the participating countries must agree on the bubble. As much as Indonesia might want to be part of a regional bubble, I can’t see other countries agreeing to it with Indonesia’s current growth in infections and comparatively low level of testing. I sincerely hope they get there, but I’d be surprised to see it soon.

Balidiscovery.com: Are there indications that reported cases of COVID-19 in Indonesia, particularly in Bali, are underreported due to cultural peculiarities, such as the stigma of having a COVID-19 infection?

Pomeroy: I can’t speak about the rest of Indonesia, but I know that COVID-19 infection carries a very heavy stigma in Bali, which is likely to contribute to its under-reporting. I’ve heard stories from Balinese friends and colleagues who have gone to great lengths to avoid being linked to COVID-19. When family members have sought medical treatment, they have even hidden or denied some symptoms, which has contributed to increased risk for health workers. That said, I have not heard of unusually high death rates in the villages that we might expect if COVID-19 was really widespread. Like everyone else, I find it very perplexing.

Balidiscovery.com: For someone living in Bali – resident or expatriate, that develops a fever or any influenza-like symptoms, what should they do?

Pomeroy:  First and foremost, isolate yourself from everyone in your household to the extent possible. At a minimum, start wearing a mask at all times, including at home to limit your ability to infect others.

Then contact a health care provider to begin the testing process. If you get a negative rapid test result but continue to have symptoms, continue to isolate yourself to protect others, and get tested again a few days later.

Balidiscovery.com:  Back to Bali. Referring to your chart tracking new infections, Bali seems to be on the upward curve. What should we be watching for in the weeks ahead? What can be done to accelerate the flattening of the curve and a declining rate of new infections?

Pomeroy: First and most important, I’m a close reader of news and numbers, but I’m not a public health expert, and that’s whose opinion really counts. Over the past week, Bali’s confirmed positive cases increased by more than a third, and I think that is worrisome. But it’s worth looking at how the numbers are breaking down. Buleleng, which had some booming clusters not long ago, seems to have intensified efforts and gotten the spread under control. Badung is also working hard at controlling their clusters and, based on local press reports, has been reasonably effective. Overall, the targeted mass testing strategy and strengthened tracing seem to be paying off. The traditional markets remain very vulnerable spots, and that’s where we’re seeing the spikes in case numbers – especially in high-density Denpasar, which has accounted for more than half of all new cases in Bali in the past two weeks. This is a battle that is being fought neighborhood-by-neighborhood, and I think the mass testing and tracing of cases can pay off if they have adequate manpower and resources to carry it out. This approach is probably less suitable in areas where market traders and customers are more dispersed, and I think those markets are likely to become key focal points for prevention – we’re seeing some of that effort this past week in press reports.