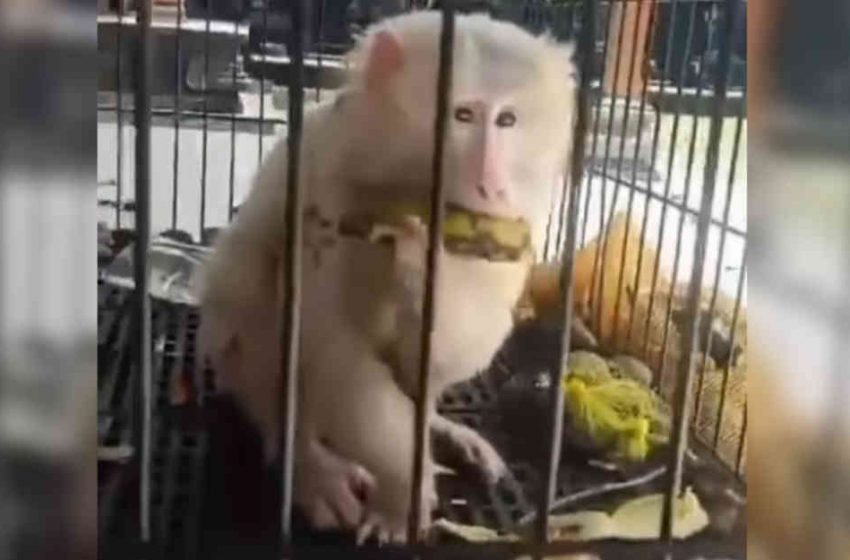 NusaBali.com reports that the injured white monkey being cared for by a team of veterinarians at the Selonding Temple in the Village of Pecatu, South Kuta, continues to improve. The rare white monkey has suffered severe wounds due to additional attacks by other wild monkeys living in the area between Pecatu and the Uluwatu Temple.

Now returned to relatively good health, the animal’s caretakers are concerned that if the rare monkey is released into the wild, it will become the target of further attacks by local monkey troops. Because of this, discussions are underway to create a permanent cage for the white monkey for its protection.

The Vice-chairman of the Udayana University Alumni Veterinarian Association (Ikayana), Dewa Made Hartanaya, confirmed that, based on observations over the past three days, the monkey has recovered well from the 05 February 2022 surgery and is ready for release back into the wild.

But doctors are expressing concerns that other primates will attack the white monkey once it is returned to nature. “The monkey was attacked again after its first operation on 05 February 2022. Our team operated on the monkey and placed it in a cage. But only three days later, the white monkey was attacked by other troop members,” said Hartanaya on Monday, 28 March 2022.

As the result of the second attack, the white monkey once again suffered severe wounds to its left hand. These injuries occurred while the monkey was housed in a specially prepared cage. The doctors speculate that other monkeys saw and attempted to steal the food placed in the enclosure of the injured monkey.

Doctors were compelled to perform another operation because of the injuries suffered while in the cage. “Since the second attack until the current time, we have continuously observed the animal. We are checking once each week, and there have been no more attacks. But other monkeys may be pursuing the white monkey,” said Hartanaya.

The veterinarians suggest future special handling for the white monkey to prevent future attacks. If necessary, said Hartanaya, a special, large cage of a representative nature be provided for the rare monkey. Hartanaya noted that given the white monkey’s role as a mascot for Pura Uluwatu, such a special cage is justified.

“We recommend that a special cage be constructed to avoid future attacks. It will be unfortunate if the monkey falls victim to other monkeys,” said Hartanaya.

The religious official (Pandlingsir) in charge of the Selonding Temple, Jro Kuta I Gusti Ngurah Jaka Praridnya (Turah Joko), confirmed that coordination is underway to create a new cage for the white monkey. Plans are now in hand to construct a special enclosure measuring 3 x 3 meters, including a pool and garden.

Turah Joko said: “These plans are being finalized. I have also communicated with the Bendesa Adat (tradition head) and the Assistant Bendesa (Prajuru). If we place the cage at the Selonding Temple, we will have to assign a person to look after the cage and the monkey. We are therefore thinking of installing the cage at the Uluwatu Temple.”