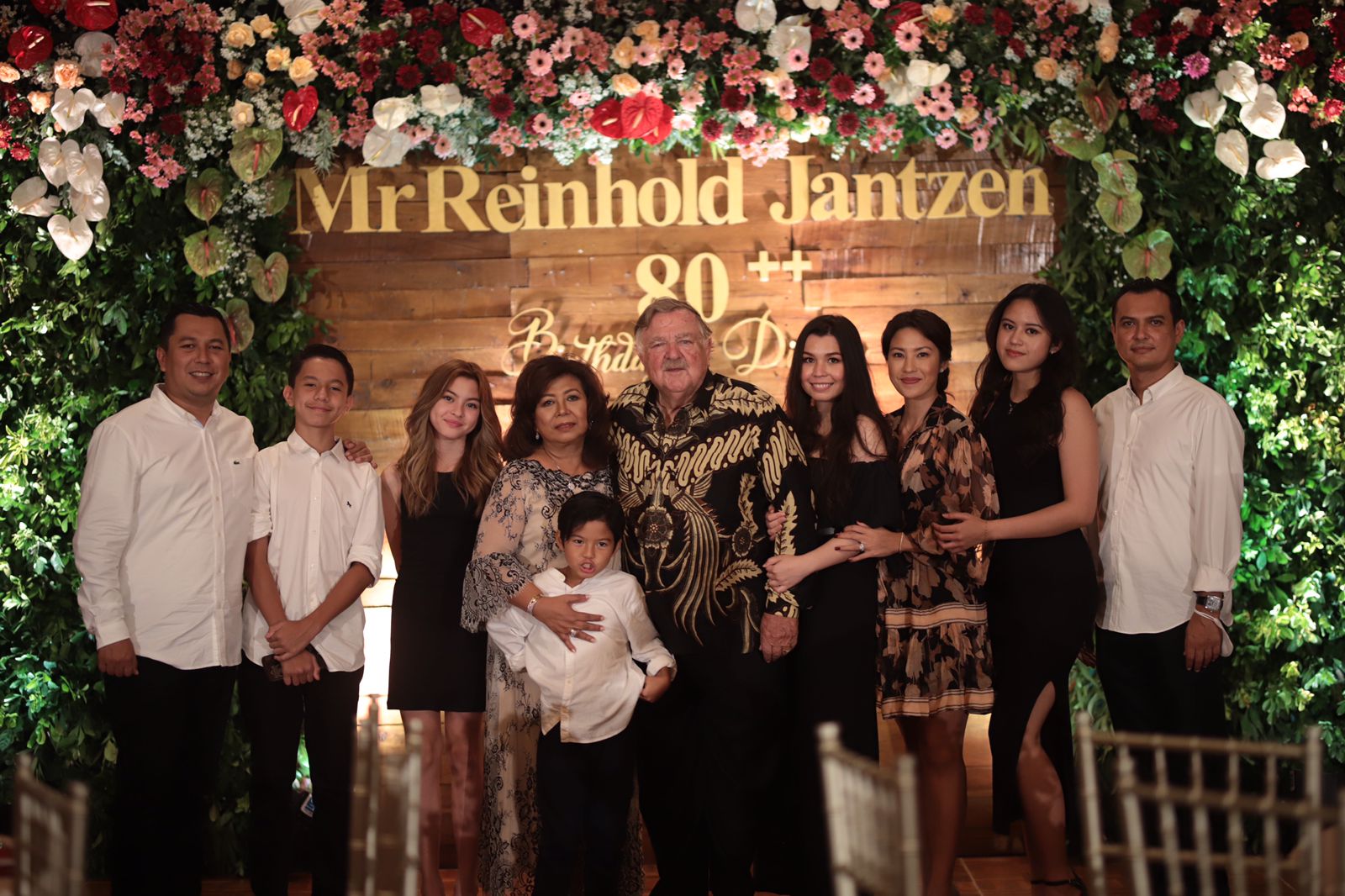 Born on 31 March 1940 in Hamburg, Germany, Reinhold Jantzen celebrated his 82nd birthday in grand style on Thursday, 31 March 2022, in the Wantilan Ballroom of the Hyatt Regency in Sanur Bali. Some 200 friends and family gathered that evening to celebrate the life of one of Bali’s most remarkable adopted sons.

There is much to celebrate in the more than eight decades of life and continuing journey of a man who has worked internationally, overcome setbacks and personal tragedy, created a thriving business empire, and is now in his autumn days surrounded by a circle of loving family and adoring friends.

Reinhold Jantzen’s journey to Bali took a somewhat circuitous route, performing fishery consultancies in Iran (then Persia), Sri Lanka, and Central Java before finally settling in Bali. The ebbs and flow of life and the romantic stirrings of a young man’s heart led Reinhold to marry Endang Suciati, a beautiful and resilient woman from Surakarta, Central Java.

The couple and their young family initially lived an almost hand-to-mouth existence from a small business of smoking fish in his garage and delivering their product by motorcycle to leading hotels in Bali. A short time later, Reinhold and Endang took the first steps to open Mama’s German Restaurant in Kuta while creating a meat processing company. In the intervening years, that company has become PT Soejasch Bali – Indonesia’s leading meat and food processing company with a nationwide network of offices in Jakarta, Surabaya, Bandung, Yogyakarta, and Bali that employs hundreds of employees working from state-of-the-art facilities. Related companies have also been established in food processing and food and beverage distribution.

In 1986, while busily growing what was to become a successful corporation from its Bali base, Reinhold Jantzen accepted an invitation to serve his homeland by becoming the Honorary Consul for the German Republic. At the time of his appointment, he was the youngest person ever appointed to such an important role. Serving for 27 years with pride and distinction, Reinhold worked tirelessly assisting German citizens visiting and living in Indonesia while hosting and welcoming German leaders on business and professional visits to Indonesia.

Extensive contacts among the Island’s provincial leaders and the trust he enjoyed as “Bonn’s man in Bali” proved invaluable as Reinhold navigated major Indonesian economic and political upheavals. Over three decades of diplomatic service, Reinhold welcomed the high and mighty of German political leadership to Bali, including two German Chancellors and at least two German Presidents.

The Consul’s role in Bali also offered many challenges spanning a period of unprecedented political and economic upheaval in the late 1990s and the two Bali bombings of 2002 and 2005. Much praised for his calmness under pressure and knowledge of the “ins and outs” of the Indonesian bureaucracy, Reinhold Jantzen was twice honored by two German Presidents with the Federal Cross of Merit with Ribbon (1996) and a further Federal Cross of Merit 1st Class (2003).

Service to the community has become a family tradition for the Jantzen clan. When Reinhold’s tenure as Honorary Consul came to an in 2013, his youngest son, Robert, stepped into the role of representing Germany’s interests in Bali. Displaying the same skill and aplomb as his Father, on Friday, 19 November 2021, Robert was awarded the prestigious Cross of Merit (Verdienstreuz am Bande) by the German Ambassador to Indonesia H.E. Ina Lapel.

We Went to a Marvelous Party

The 82nd birthday party held at The Hyatt Regency was a lavish affair, resplendent with outstanding wines and fine meats purveyed by PT Soejasch Bali.

During the course of the evening, a moving opening tribute and invocation were offered by Bishop Em. Dr. Ketut Waspada of the Sinode GKPB – The Protestant Church in Bali. However, the highlight of the evening was the heartfelt comments of affection and thanksgiving shared by Honorary Consul (retired) Reinhold delivered with his beloved wife, Endang Jantzen, on his arm.

Three generations of the Jantzen family were on hand to celebrate the evening, led by the current German Honorary Consul Robert Jantzen and Tania’s, his wife. Robert and Tania were accompanied by their children: Nana Kayana, Ashania Moira, and Jadrian.

Daughter Nicole Jantzen flew in from Australia, where she is attending university, to be on hand for the special night.

In fact, Reinhold Jantzen freeing admits that one of his greatest joys is how his children and their spouses almost universally now fill key roles in “the family business.”

In lieu of gifts and flowers, well-wishers attending the birthday party were urged to make a donation in Reinhold’s name to Rotary Club Bali Nusa Dua. Over the course of the night, a substantial sum sufficient to pay the entire cost of five cleft-palate cranial-facial surgeries was donated to the Club. [Nusa Dua Rotarians 2,000th Cleft-Lip Repair.]

“I Did it My Way: My Life Between Hamburg and Bali”

To read the mesmerizing life story of Reinhold Jantzen, consider purchasing his “I Did it My Way: My Life Between Hamburg and Bali,” written with Willi Andersen (2019, Afterhour Books). The book can be purchased at Das Bistro by Mamas in Pemogan, South Denpasar, or Mama’s German Restaurant in Legian, Kuta.

The book is also available for purchase online

Purchase from After Hours Books

Generational Duty to The German Republic

Berlin’s Man in Bali Given a Cross of Merit