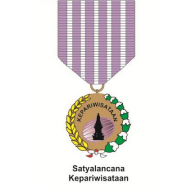 Two of Bali’s leading figures received a Satyalencana Award for their service to Bali and National tourism bestowed by President Joko Widodo in a ceremony on Tuesday, 17 August 2021 – Indonesia’s Independence Day.

Quoted by the State News Agency Antara, the Head of Bali’s Provincial Tourism Service (KaDisparda), Putu Astawa, commented, “I express (Bali’s) appreciation for the award given to these two individuals.

The Satyalencana Kepariwisataan Award was given to the late Ida Pedanda Gede Ngurah Karang and Tjokorda Gede Putra Astawa Sukawati (Cok Putra) during the celebration of Indonesia’s 76th anniversary of its declaration of independence held at the National Palace in Jakarta. The Ceremony was conducted in a hybrid manner broadcast by live stream organized by the Ministry of Tourism and the Creative Economy.

Astawa said the two recipients of the prestigious awards had contributed their efforts toward developing Bali tourism. The late Ida Pendanda Gede Ngurah Karang is credited with acting as a pioneer in the foundation, championing cultural tourism, and establishing the “Indonesian Floating Fair.”

Ida Pandana inspired many Balinese business people to involve themselves in the Island’s primary industry by encouraging membership in the Indonesian Hotel and Restaurant Association (PHRI-Bali). This precipitated the development of domestic and international tourism and, partly through Pandana’s efforts, the creation of a Balinese-based tourism economy in the Sanur Beach area of Bali.

Sukawati said he hopes that by winning the Satyalencana Awards, he would serve to motivate tourism practitioners in Bali to renew their spirit to build a quality and sustainable tourism industry on the Island in keeping with the vision of the “Nangun Sat Kerthi Loka Bali” – mantra calling for the preservation of the Island’s purity and natural harmony as the means to guarantee the happiness and welfare of the Balinese.

Cok Putra, who participated in the award ceremony via a virtual online link from his home in the Puri Ubud-Gianyar, expressed his thanks and appreciation to the government for the trust represented by the honor given to Puri Ubud and the members of the Royal Household. He commented further that the receipt of the award would have been impossible without the dedication of those attached to the Palace. He explained that his role is merely that of the current member of the Royal Household, who is responsible for continuing efforts to improve and develop cultural tourism in useful ways to the public. Adding: “Clearly, this award is more than any euphoria attached to receiving it, but also as a personal challenge to fulfill my great future responsibility and the need to develop cultural tourism in ways that benefit the people.”

Earlier during the awards ceremony, the Minister of Tourism and the Creative Economy, Sandiaga Uno, said the awards to the two men reflected the careful considerations of his Ministry and the Provincial Government endorsed by the President.

Five tourism figures were honored with Setyalencana Award at this year’s ceremony: