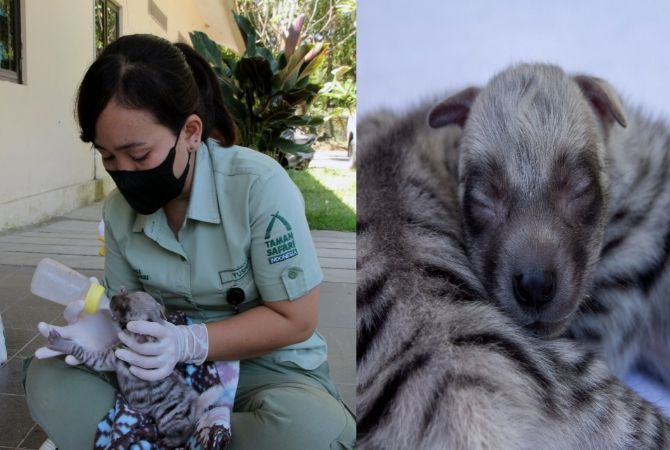 As reported by Beritabali.com, the two hyenas were born in Bali on 28 April 2021 to an existing captive pair of hyenas – Manama and Adiiya

During their first months of infancy, the four hyenas received intensive care and medical attention from the Park’s professional medical team. As explained by Dr. Yohana Kusumaningtyas, the senior veterinarian at the Park, six days following their birth, the mother’s milk from Adiiya proved insufficient to meet the needs of the two babies. As a result, a special formula was concocted and given to the animals once every four hours.

The newborns’ weight and general condition were continually monitored, and their formula changed as required. Two weeks after birth, the baby hyenas opened their eyes for the first time and, a week after that, baby teeth began to emerge. With eyes wide open, the one-month-old hyenas started to walk and explore their immediate surroundings as they transitioned to solid foods.

Nyoman Suartawan, the Assistant Curator at Bali Safari, commented: “The birth of the baby hyenas represents the results of a collaborative effort by everyone at Bali Safari, including the gamekeepers who consistently apply good principles of animal conservation.”