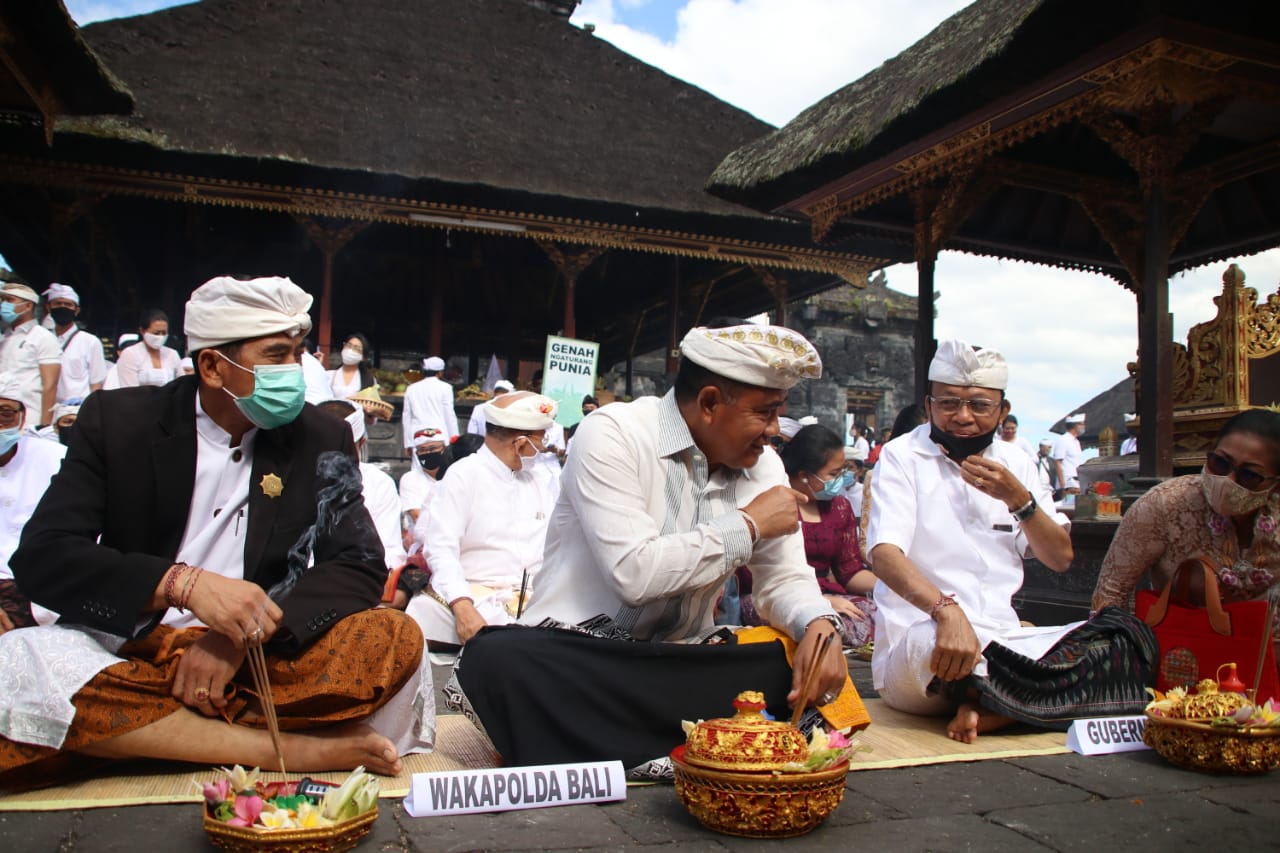 The Province of Bali held a Pemahayu Jagat Ceremony at Bali’s Mother Temple of Besakih on Sunday, 05 July 2020. Held in conjunction with the auspicious dates of Pernamaning Kasih and Banyu Pinaruh – the major ceremony was conducted to welcome Bali’s New Era of Tourism that started on 09 July 2020.

The Pemahayu Jagat Ceremony at Pura Besakih on 05 July 2020 was held to issue thanks to the Almighty and seek continuing divine blessing during the ensuing step-by-step reopening of Bali.

Following the formal ceremony, the Governor’s delegation moved to the Pura Besakih Wantilan to meet the press and others in attendance. In the ensuing discussion, the Governor outlined the obstacles and problems ahead in establishing Bali’s “New Era.”

Koster described the COVID-19 Pandemic as a world-wide plague with a high rate of contagion. The Governor also mentioned a plague of leprosy that afflicted Bali in the year 1599 AD. The Governor explained the Balinese belief that plagues are a sign of imbalance in the cosmos. The Pandemic represents a threat to those members of the community failing to live according to Balinese traditions stipulating balance must always be maintained between humankind and the spiritual world, between humanity and nature, and among the many members of the community.

The Governor repeated that Bali would reopen to the world in stages. Businesses have reopened to a limited extent on 09 July, domestic tourism will open in Bali on 31 July, and international tourism will resume on 11 September 2020.

The Ministry of Education and Culture will announce the decision on the reopening of schools in due course.

The second phase will see Bali reopen its doors to only domestic tourists on Friday, 31 July 2020.

“Balinese are always asked to wear a mask, keep physical distance from one another, not to gather in groups, frequently wash their hands in running water, live cleanly and healthily, and maintain their immune systems.”

The third phase of reopening is scheduled for 11 September 2020 – five days before the celebration of Galungan in Bali – when foreign tourists will once again be allowed to visit Bali.

The Governor told those attending the gathering after the religious ceremony: “I ask for all Balinese to undertake the three phases by following the ‘Protocols for Living in the New Era’ in an orderly, disciplined, and responsible fashion. Balinese are always asked to wear a mask, keep physical distance from one another, not to gather in groups, frequently wash their hands in running water, live cleanly and healthily, and maintain their immune systems.”

In closing, Governor Koster offered his thanks to medical workers, the Armed Forces, Police, Prosecutors, Regents across Bali, the Mayor of Denpasar, traditional village associations, religious associations, and local community organizations press and many other dedicated individuals who have worked hard to battle COVID-19.