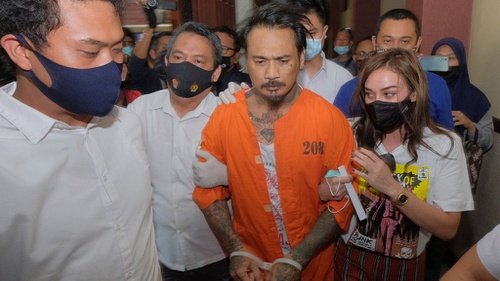 The trial of the outspoken Bali punk musician, I Gede Astina (43), more commonly known as JRX, from the group Superman is Dead, was scheduled to commence on Thursday morning, 10 September 2020.

JRX is charged with criminal defamation and hate speech for online comments critical of the Indonesian Medical Association (IDI). The musician’s trial was scheduled to be a virtual proceeding – held over video links connecting jurists, prosecutors, and the accused from three separate Bali locations.

As reported by NusaBali, the musician is facing a possible six-year prison term for having the temerity to accuse the IDI of being the “lackeys” (kucung) of the World Health Organization (WHO).

IDI is a professional association whose membership is comprised almost entirely of Indonesian doctors.

The online trial available to the general public via an online link saw JRX and his attorney “walkout” by refusing to participate in the legal proceeding, claiming the inherent inability to confront prosecutors and his accusers directly precluded the musician from receiving a fair trial.

Following the walkout, and despite the absence of the accused, State Prosecutors continued reading into the court transcript and video-record the details of the charges filed against by JRX.

The online trial began at 10:00 am and connected a panel of three judges led by judge Ida Ayu Adnya Dewi from the Denpasar Court House, a group of Prosecutors led by Otong Hendra Rajayu sitting next door at the State Prosecutors Office, and the accused together with a legal team of 13 lawyers located at Bali’s Police Headquarters on Jalan WR Supratman in Denpasar.

JRX was transported to the Police headquarters from Bali’s Kerobokan Prison, where he has been held since Wednesday, 12 August 2020.

Before walking out from the trial, JRX’s legal representative and the accused engaged in a brief debate with Presiding Judge Ida Ayu Adnya Dewi. In the verbal exchange, JRX said: “Excuse me, Your Honor, I continue to refuse to submit to an online trial because I cannot be fully represented. This is because Your Honor cannot see my gestures, which opens the possibility that your verdict could be incorrect.”

JRX’s attorney, I Wayan “Gendo” Suardana, put forward a similar objection, who insisted the trial to be held in a standard, open format. The accused should be allowed to attend the trial at the Court House in Denpasar. Gendo said: “We ask that the proceeding be publicly conducted. Before this trial, there is an example of an open trial held by the Court in Singaraja (North Bali). The same can therefore be done in the trial for JRX.”

JRX and his attorney’s request was rejected by Judge Dewi, saying: “The objection by you and your attorney will be recorded, but the trial will proceed with the reading of the charges.”

Responding to the Judge, JRX said: “I apologize, Your Honor, but as the defendant in this trial, I refuse to participate in an online proceeding. If I am forced to do so, I chose to leave the trial.” At this point, JRX stood up and left the third-floor room at the Bali Police Headquarter.

With JRX no longer in attendance, online, or at Police Headquarters, the Presiding Judge continued the trial by allowing the State Prosecutors to read the formal charges against the accused. State Prosecutor Otong Hendra Rahayu accused JRX of purposefully posting the “slanderous term” “IDI Kacung WHO” (IDI is the ‘lackey’ of the WHO) via his Instagram Account (@jrxsid) to attract the attention of many people. Otong said that JRX knew in his capacity as a public figure that the subject posting would “go viral” – both locally and internationally.

The Prosecutor cited several Instagram and social network postings that he alleges defamed the good name and fomented hate against IDI in Bali.

The first posting on 13 June 2020, written in Indonesian and translated here, said: “Just because they are proud to be lackeys of the WHO, the IDI and hospitals are arbitrarily requiring all women giving birth to be tested for COVID-19. There is much evidence that these test results are often inaccurate – why must they be forced (to take the test)? If the testing causes stress and (potentially) causes the baby/mother’s death, who will take responsibility?”

Later, JRX posted the commentary: “Disband the IDI, I will not stop attacking you (at) @ikatandokterindonesia until there is an explanation for this matter. Are people being pitted against the IDI and Hospitals? No. It is the IDI and hospitals who pitted themselves against people’s rights.”

On 15 June 2020, JRX reportedly posted how, in 2018, 21 doctors died and whose deaths were recorded by the media. Continuing, he then alleged there was a “rotten conspiracy” to dramatize that doctors have only died in the current year (2020) so that the public would be extremely frightened about COVID-19.

Because of his postings, JRX was charged under the Information and Electronic Transaction Act (UU ITE) with crimes punishable by up to six years in prison.

According to NusaBali, while the trial was underway, hundreds of JRX supporters participated in a peaceful demonstration outside the Denpasar Courthouse. The protestors were demanding that the prosecution of the musician be carried out on a face-to-face basis. The one-hour demonstration ended when a spokesman for the group met directly with the Denpasar Court’s Head to communicate the group’s concerns.

The protestors also demanded JRX’s trial be allowed to proceed without political intervention from any outside party.